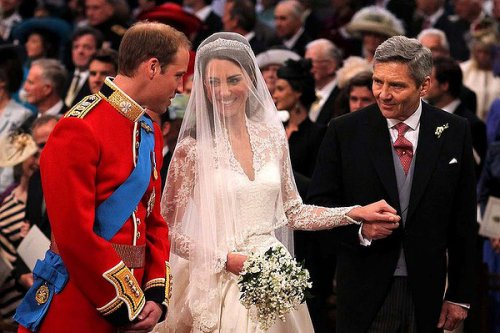 Many classes talked about the Royal wedding in their English class. Here are some sentences by the students of 3e.

In 1981, Prince Charles married Diana. She wore a big dress with an eight metre train !

He gave her a beautiful blue sapphire and diamond engagement ring. It was his mother’s ring, Princess Diana.

Kate wore a beautiful white lace dress with lace sleeves. Some people thought it was boring. It looked like Grace Kelly’s wedding dress. Her train was only two metres long.

Kate and her father came into the church. William said, ‘You look beautiful’

They sang the British national anthem during the ceremony.

God save our gracious Queen

Long to reign over us

Kate and William didn’t kiss in the church. They went to Buckingham palace in a horse and carriage. They kissed twice on the balcony. The first time was very short and the second time was better. Everyone cheered and was happy except the three year old little flower girl. She was funny because she didn’t like the noise so she covered her ears.

It was a beautiful but long wedding.